Skip to content
I call this “clumsy” Shepherd’s Pie because it is actually born of a mistake- as the best recipes often are. In my family Shepherd’s Pie has always been made by just mixing browned ground beef with corn and putting mashed potatoes on top. Tasty but a little bland for my taste so I tinkered with it until I found a result I liked. Far different than the traditional Shepherd’s Pie (Gordon Ramsey forgive me), it was still a dish I liked and so did most everyone else. So up until this recipe was born my Shepherd’s Pie consisted of steak, onions, garlic, and corn in gravy with mashed potatoes on top. One night while cooking dinner with my thoughts elsewhere, in blatant violation of my own rule, I made the mashed potatoes way too thick and the base way too runny. I went to spread the potatoes over the base and they sunk right in. I was appalled! Well, after much swearing and slamming of pots and pans I thought about what I was going to do next. We couldn’t afford to have the pizza fairy drop by that night and it was the beginning of the week so there were no left overs yet. In the end I mixed the potatoes into the base and spread drop biscuit dough over the top. I put it in the oven to bake, thoroughly convinced it was a disaster and no one would like it. I was, however, mistaken. Everyone liked it better than my original version! I’ve made it this way ever since.
On to the fun part!
You can make this with ground beef or ground turkey if you want but I much prefer round steak. 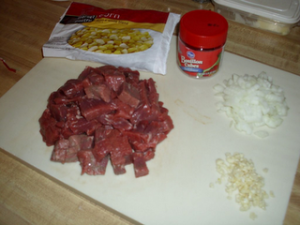 I like to brown the steak with the onions, add the garlic & cook for a minute and then simmer the whole lot in beef broth (which will later become gravy) for at least an hour. This gives it wonderful flavor and makes the steak bits SO tender- but
you don’t have to do it that way.
.

At this point you either make gravy or simmer the meat in the broth. The meat is sitting in a bowl because I use bullion cubes for broth and I like to use the pan the meat was cooked in so all the browned bits make it into the gravy. BTW, I do this EVERY TIME I make gravy. It’s just the way things should be done so that you end up with the most flavor. If you’re using canned or boxed broth you can just leave everything in the pan. Once you have your broth in the pan you can add the meat mixture back in along with your corn. I use frozen but you can use drained, canned corn if you want. If you use frozen go ahead and boil the mixture in the broth for a few minutes just to give it a head start on cooking. Next make your broth into gravy. I use a corn starch (corn flour) slurry of 1/4 C water and 2 T corn starch mixed together. DO NOT just put the corn starch into the hot broth!! It will instantly clump & ruin the gravy.
Let’s talk mashed potatoes. For things like this I make mine out of potato flakes mixed with milk, butter and chicken broth. I NEVER use water to make mashed potatoes- fresh or boxed. The same goes for rice, BTW. Unless I’m cooking for a vegetarian I just don’t see any point in letting this opportunity for adding flavor to an otherwise bland dish go to waste. Potatoes and rice cooked with chicken broth have a rich flavor. Potatoes and rice cooked in water tend to have the flavor of wall paper paste. While your meat is browning go ahead & make your potatoes. It’s OK if they cool off while you’re doing other things.
When the mashed potatoes are done and your gravy has thickened add the potatoes to the meat mixture and stir. Don’t stir too much- you want to be able to see that there are mashed potatoes in there. It should look like this:

Now let that mixture sit while you make the biscuit topping. I use Bisquick and milk. Usually I addParmesan cheese but this time I forgot. Didn’t even cross my mind while I was gathering ingredients. But it didn’t make too much difference- the dish is still super yummy! You’re making drop biscuit dough- slightly runny drop biscuit dough. You want it to spread a bit when you drop it onto the casserole.

Yes- it looks like cottage cheese. It’s supposed to. When this is ready pour the meat mixture into a 13 x 9 baking dish. Now drop the topping mix by large dollops onto the top of the meat mixture.

Put into the oven until the biscuits are as browned as you like them and the gravy is bubbly.

So easy and so definitely comfort food! Awesome on a cold winter night. So here’s to fortuitous mistakes! May all of yours turn out as well as mine :.)
Clumsy Shepherd‘s Pie
1 Lb Round Steak (or Ground Turkey or Ground Beef)
1/2 Medium Onion, chopped
3 cloves Garlic, minced
4 C Beef Broth (Canned, Boxed, or made from Bullion Cubes)
1/2 small bag Frozen Sweet Corn (or 1 can corn)
Cornstarch Slurry made from 1/4 C cool or cold water & 2 T cornstarch
4 servings Mashed Potatoes (about 3 cups)
1 recipe Drop Biscuit Dough (recipe below)
Drop Biscuit Dough
2 C Bisquick (or similar baking mix)
1 C Milk
1/2 C Parmesan Cheese
Combine well in medium bowl. Let sit 5 minutes.
To assemble casserole:
Make the mashed potatoes in whichever manner you choose. Brown meat, draining if using ground. Halfway through cooking, add onions. Once meat is brown and onions are golden add garlic and cook for one minute. Add broth or remove mixture to bowl to make broth if using bullion cubes. Add corn and let boil 5 minutes. Make the gravy by slowly adding the cornstarch slurry to the broth and meat mixture, stirring constantly. Let the mixture come to a boil, thickening fully. Once thickened, take off the heat. Make the drop biscuit dough and allow to rest 5 minutes. Add mashed potatoes to mixture, stirring well but not fully incorporating them. Pour mixture into a 13 x 9 baking dish and drop or spread biscuit dough over the top. Bake at 375 degrees for 20 minutes or until biscuits are browned and gravy is bubbly. Let cool 10 minutes or warn people that it will be VERY HOT!