The weather has been blissfully cool and gloomy for the last few days. I’ve been in heaven! And today… Oh, today! It’s cool with a tiny breeze and the sunshine has been gentle and golden; today is a perfect early autumn day. By the time you read this, a few days will have gone by and we could very well be in the 80’s again. So I am enjoying every second of today. We had fire grilled steak for a leisurely lunch and for dessert after an equally leisurely dinner I have apple crisp planned. No, the oven is still not fixed. I have decided to start finding alternative methods of dessert production. As it turns out, the slow cooker is actually pretty fair at making desserts. I have found several recipes that I will be trying and, probably, posting here. I have been craving apple crisp terribly and decided to try it in the slow cooker. It worked really well! You just have to plan ahead a little more than you would with the oven version because it takes about 4 hours to cook in the slow cooker as opposed to only an hour in the oven. This would be perfect to start in the morning on a weekend day, go do whatever the day has in store, and then come home to for lunch. The smell is every bit as awesome as the oven version and so is the taste! The only difference is the topping. It doesn’t actually get crispy like it does in the oven. But that is really the only “down side” of using the slow cooker. 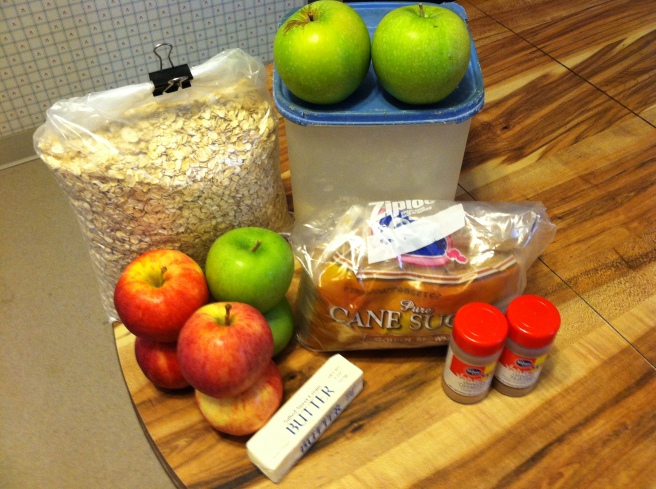 I prefer to use a mixture of tart and sweet apples for crisp. The flavor of the end product is delightfully intriguing and you get the added bonus of not needing to use as much processed sugar because of the sweeter apples that are included. The apples I chose this time are Granny Smith and Galas. You have to make sure you choose nice, firm Gala apples for cooking or baking. Sometimes Galas can be mealy and those won’t hold their shape when cooked; they’ll just turn to mush. To find a firm Gala apple, give it a light flick. If the flick produces something akin to the sound you get when you bite into a crisp apple you’re in business. If the flick produces a sound akin to a dull “thump” then you have a soft and/or mealy apple that you don’t want to use.

Start by getting as big a bowl as you can manage and fill it about halfway with cold water- use a stockpot if you have to because you need ALOT of room for the apples. Add about 1 tablespoon of lemon juice to the water and you have acidulated water. This is perfect for keeping your apples from turning brown as you work with them. Now peel your apples and put them in the water. After you’re done peeling them all, core and slice them into 1/4 inch slices, taking one apple from the water at a time and returning the slices to the water. Set the apples aside and move on to the topping. Here is your new best friend when it comes to cutting butter in to flour in just about any recipe:

Yep. A grater. Normally I would use a box grater, but as mine is packed this is what I use when I need a grater. Make sure your butter is frozen, then grate it using the larger holes. Be careful as you grate the butter- it’s a fat so it can get slippery. I use the wrapper to hold the butter for as long as I can as I grate it. Here is what you end up with:

Little pieces that are SO much easier to work into flour with the cutter! Now you can mix the flour, part of the brown sugar, and the oats together, then put them into the bowl with the butter. Mix the whole lot with a fork to get the butter off the bottom of its bowl and then use a pastry cutter or 2 knives to cut the butter into the flour. (If you’re using the knives, use butter knives and hold one in each hand so that it looks like you are trying to cut something on a plate, only with 2 knives instead of a fork and a knife. That is also the basic motion you’re going for- overlap the knives side-by-side in the middle and “cut” away from each other.) Cut the butter in until you get a crumbly texture with pieces the size of small peas. Like so… 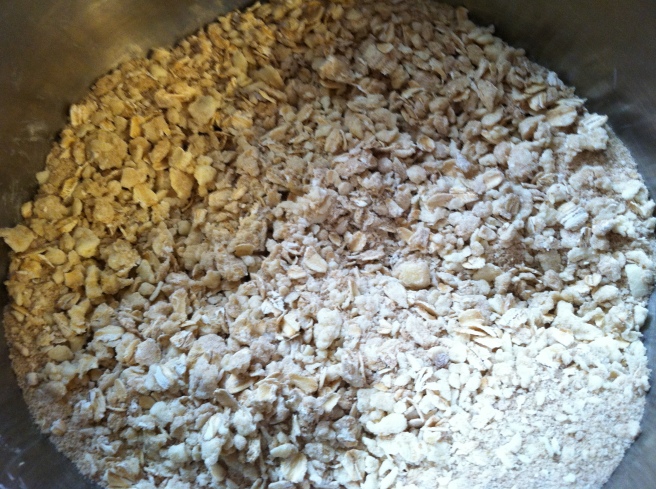 Once the topping is done, butter or grease the crock of a large slow cooker. I use butter because I’m trying to get away from cooking sprays & other nasty things. Use whatever you like. Now drain the apples in a colander, put them back in the big bowl, and add the rest of the sugar and the spices. Stir the apples & sugar together and then pour the mixture into the crock. Put the topping on and press down gently so that it’s slightly packed, thusly…

Put the lid on and cook the apple crisp for about 4 hours. If you’d like, you can take the lid off for the last 20 minutes to firm up the topping a bit, but it’s not imperative. It will be tasty either way!

The result is awesome! So long as you don’t cook the crisp any longer than about 4 hours, the apples will have great texture and the flavor is wonderful. The only “problem” I have with this method is that you end up with a little bit of runny liquid in the final product. With the oven method the syrup or juice boils down into a nice thick pie-filling type thing. That can’t happen in the slow cooker. There isn’t a lot of it and if you stir the apple crisp up in the bowl you eat it out of you really don’t notice it. But if that’s a turnoff for you, you could just add 1 tablespoon of cornstarch to the apples when you mix in the sugar & spices. 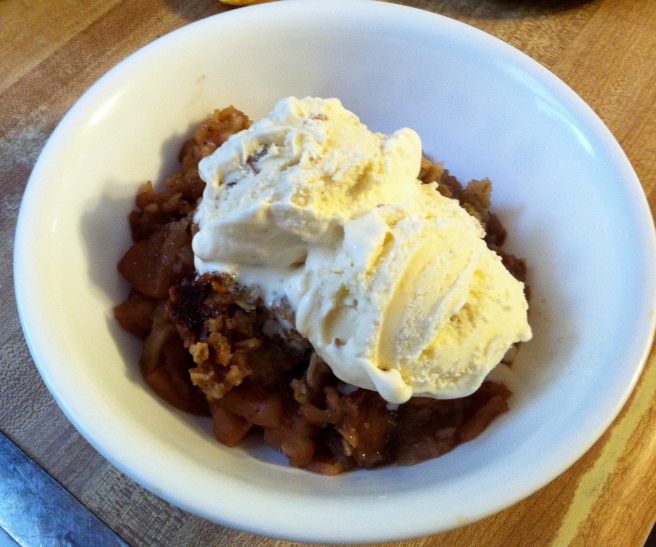 Now that Autumn is officially here I am so excited to start eating the foods of the season- and this is the perfect way to start! Next week I will be bringing you another quintessential food of fall; pumpkin! But I promise you: this is NOT the typical pumpkin treat. This will take pumpkin pie to a whole new level- and make it perfectly acceptable to eat for breakfast! And no; it’s not yet ANOTHER muffin or bread recipe. Stay tuned!

1/8 t Nutmeg (don’t omit this just because it’s a tiny amount! It will add a wonderful flavor!)

*Butter or spray the crock of a large slow cooker (mine is 6 quarts. Anything smaller than 4 or 5 quarts is too small).

*Cut the butter into the flour mixture and set aside.

*In a large bowl, combine apples with the remaining brown sugar and the spices.

*Spread the apples evenly in the crock, followed by the topping.

*Pack the topping very slightly onto the apples.

*If desired, leave the lid off for the final 20 minutes of cooking to firm the topping up a bit.

*Garnish with ice cream (seriously- butter pecan is incredible with this!), whipped cream, or eat as is.