I almost didn’t do this post. I almost threw the Christmas pudding away and said “forget it” to Christmas dinner. The two months running up to Christmas were awful. (Things still aren’t great but no one wants to read my belly aching- not even me.) The last thing I felt like doing was making a big dinner and a big to-do. But in trying to hang on to the true reason for Christmas I found that making the season bright for my kids this year meant doing little things- like making treats and listening to Christmas music that told the story of Jesus’ miraculous birth. And they were excited to try the Christmas pudding so I had to finish the series. Thankfully it was done, for the most part. All I had to do was put it in the steamer for a couple of hours and make a super simple sauce to go over it. Actually, the whole thing was really simple now that I look back on it. The hardest part was shredding the suet- that was pretty messy. But now I know that I need to freeze it first so it doesn’t melt all over my hands. Other than that, it was easier than making a cake the modern way; I didn’t even have to bother greasing and flouring a cake pan!

You have to have a pretty big steamer to heat this pudding. I have a stock pot with a pasta basket insert so I used that. I left it to steam the entire 2 hours the recipe called for. I thought about letting it go only an hour because the 2 hour time was for the full sized pudding and I only made a half batch. But when I checked it at one hour I could tell the pudding wasn’t soft enough- the middle wasn’t going to be anywhere near hot and soft like it should be. So it took the entire 2 hours. In the last 5 minutes of the cooking time I made the sauce. It called for powdered sugar, butter, and rum (the recipe is below). I wanted my kids to be able to eat the sauce so I used milk instead. Here’s the pudding when it came out of the steamer and I managed to get it out of the towel: 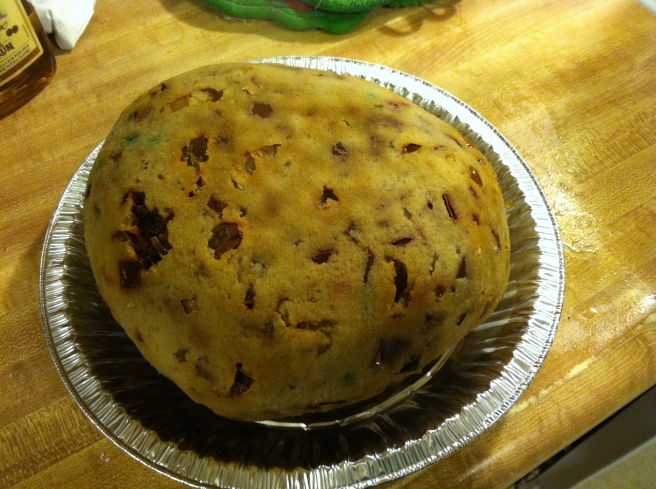 Let me tell you: getting the string off of the top of the towel to unwrap this pudding was an adventure. It was HOT!! But it only took a second once the proper knife was brought out (a thin fillet knife) and the whole pudding came right out of the flour sack towel easier than a cake coming out of a greased pan. The towel is permanently stained, but I don’t care. I didn’t buy them to be pretty & white & hang on a towel bar for guests to admire. I bought them to be used. Heavily. It’s doing it’s job. So don’t use a flour sack towel you want to keep looking pretty.

The next step is purely for presentation. I didn’t have to do it. But I knew the kids would love it. I took about 4 ounces of rum, poured it over the pudding, and lit it… 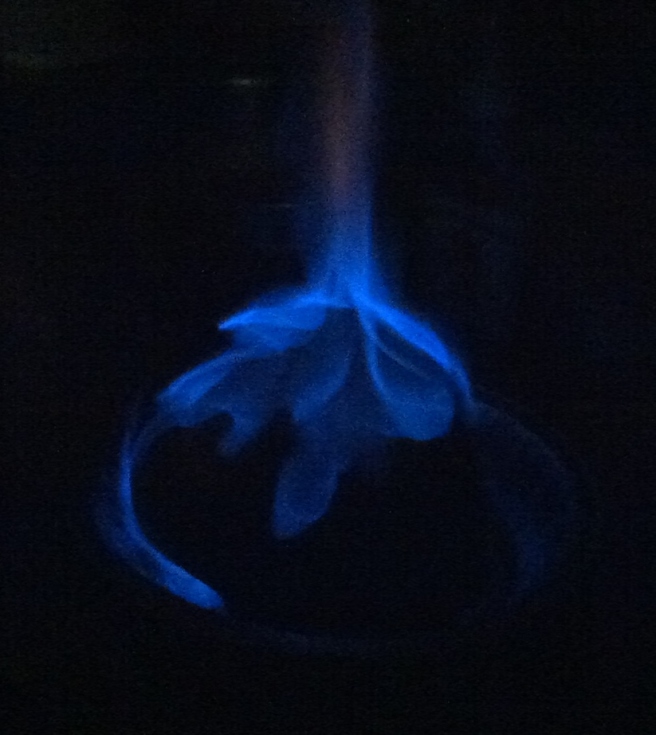 Ooh and ahhs all around, I assure you! The kids thought it was grand and even my husband was very impressed. The picture doesn’t do it justice- you’ll have to try it for yourself! 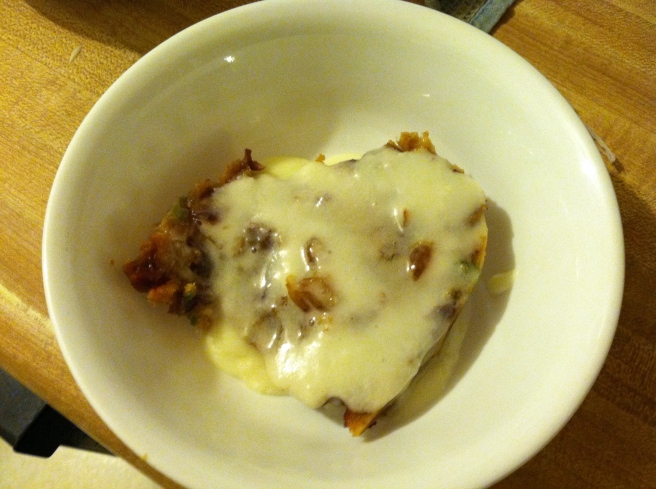 As it turns out I should have made a quarter batch. I had about half of my pudding left over. Ron & I really liked it, Zachariah kind of liked it, but the girls both hated it. They didn’t like the texture of the raisins (one doesn’t like raisins at all so was rather set against it from the start). The flavor was very rich but not overly sweet- even with the healthy serving of sauce. I think I will make another, smaller batch this year and wrap it in a second flour sack towel to avoid the pantry problem I had with this attempt. Maybe another 11 months will develop the kids’ palates enough to enjoy it 😉 And maybe next year Christmas will be a little better time and I can enjoy the busyness more than I did this go round.

I hope you all had a wonderful Christmas and your new year is going smoothly! I hope to continue to bring weekly installments of wonderful food, helpful hints, and a bit of snark this year. I really do enjoy being a food blogger- it’s a lot of fun for me! I hope you will continue to join me here in my little corner of the blogosphere!

2 T Rum, Brandy, or spirit of choice (I wanted the kids to be able to eat this without the strong flavor of the alcohol so I used milk)

*Mix the powdered sugar, butter, and salt (if using) together in a bowl. You can just stir it by hand with a fork or spoon- you don’t have to use a mixer if you don’t want to.

*Add in the liquid and stir well. The sauce should be runny but not watery. If you need more liquid add it in by the teaspoonful.

*Spoon desired amount over each slice of Christmas Pudding- just don’t go over board. You have to have enough for everyone 🙂