So here we are in one of the coldest parts of the country, and we moved here willingly- happily even. Believe it or not, we wanted to move to northern Wisconsin. When my husband got his job with the railroad and it became very clear that staying in Colorado wasn’t going to be an option, we started very seriously researching places to live. And when we realized that we didn’t like South Dakota as much as we thought we would, we started taking trips to places we thought we would like. Turns out, northern Wisconsin just immediately felt like home. Some have called us crazy; “I mean, the winters there are awful!” they would exclaim. This is true. But they aren’t a whole lot worse than eastern South Dakota. And from what we’ve experienced in the last 2 months, the rest of the year more than makes up for the winters.

Now, having said that, I do have to say as well that I put a lot of effort into making sure my family is comfortable when it’s miserably cold outside. Sweat shirts, warm socks, hot chocolate, and hearty, piping hot foods that will stick with them for awhile. One of the easiest ways to get a hot breakfast into my family is to make farina for breakfast. You might know it by it’s brand name: Cream of Wheat. I know, I know; it’s old fashioned. Fuddy duddy. Incredibly bland and boring. At least, that’s what you think. But in all reality, farina is the perfect blank canvas for a surprising number of favorite flavors. Don’t believe me? Then read on; I’ll show you some fantastic ideas for jazzing up a classic hot cereal! (I’ll put the recipes at the bottom, giving amounts for 2 large servings.)

First, I want to take a minute to talk about the cereal itself. I use Bob’s Red Mill farina (also called creamy wheat on the package). I do like that it’s organic but, more than that, I like the finer texture of the finished cereal as opposed to the slightly coarser finish of brand name Cream of Wheat. I can also buy the Bob’s Red Mill cheaper on Amazon than I can buy the Cream of Wheat at the store (because we have Amazon Prime so our shipping is free), so that’s what I use. You can, of course, use whichever you like. Just make sure to follow the preparation directions carefully, because if you don’t you’ll end up with a lumpy mess.  Also, I cook mine with one part milk and 3 parts water to give the cereal a little more flavor and a little extra creaminess. You can use whatever ratio you prefer. So without further ado, let’s get down to the tastiness!

Or how about a cinnamon roll for breakfast that won’t leave you hungry 20 minutes later? It’s super easy to make cinnamon roll farina! To your batch of finished cereal add cream cheese, brown sugar, vanilla, and cinnamon. That’s it! You can make an easy powdered sugar glaze to swirl over the top by adding a little milk to powdered sugar; that’s all glaze is. Or if you have some cream cheese frosting left over from something (like I did from my carrot cake), you can add a dollop to your bowl. This is my favorite way to eat farina!

Ok, so if cinnamon roll is my all time favorite farina flavor, this one is a close second. Two words: BANANA BREAD. Seriously! Banana bread hot cereal! I wouldn’t joke about something like this. Add mashed banana, cinnamon, nutmeg, some walnuts, and a little butter and you’ve got a bowl of warm banana bread. So comforting on a cold morning! 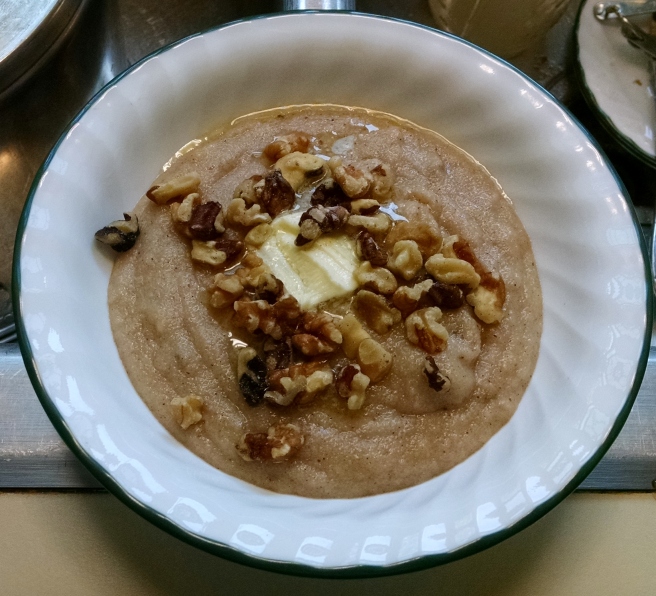 And here’s my kids’ favorite way to eat farina: french toast! This one was thought up when the kids and I were discussing all the different things one could do with farina. The thought struck me and after a couple of minutes I had a basic idea for the how to. I tried it a few weeks later and it was awesome. All it takes is adding sugar, vanilla, maple syrup, and eggs to the hot farina. You do have to temper the eggs first, though, or you’ll end up with scrambled egg farina and that’s just yucky. I’ll add those instructions below. Add a pat of butter and an extra drizzle of maple syrup and you’ve got a bowl of french toast tastiness. This is such a fun way to serve this old fashioned cereal!

Mmmmm…. those are some super awesome bowls of comforting yumminess!! And get this: you can make a big batch and reheat it as you need it! That’s right; you can make a double or triple batch and warm it up throughout the week. All you need to do is add a little milk as you microwave it to get it back to the desired consistency. That makes it an even better weekday breakfast! So go ahead and embrace an old fashioned classic; your stomach will thank you on the cold mornings to come!

For Glaze, if desired:

Butter and/or Walnuts for garnish

2 Servings Cooked, Piping Hot Farina (for this one I usually use half water and half milk to cook the cereal)

Pat of butter and extra maple syrup if desired

*To temper the eggs before adding to the cereal: Beat the eggs in a small bowl then add about 1/4 C of the fully cooked hot cereal a little at a time while stirring the eggs constantly. Once that’s done, you can put the egg mixture back into the pot and stir it in.

*Heat the pot of cereal to a simmer once again to ensure that the eggs are cooked through.

*Add the rest of the ingredients and stir well.