Yes; you read that right: Maple Syrup Dumplings. As in soft, pillowy biscuit-style dumplings in a smooth sauce of maple syrup. Because sometimes it’s SO HARD to get out of bed with all of the not-so-great stuff you may have going on in life and you just need something indulgent and comforting for breakfast. Or because sometimes you get tired of the same old rotation at breakfast time and you need something easy but NEW to get your day started right. I would fall in the camp of the former. Right now things are just not as awesome as they should be. And while things are, in fact, improving, there are days that I have to argue with myself to get out of bed and take care of business. Those are the mornings that I try to make something fun for breakfast that will be a pleasant respite from “stuff” for my family and I. Maple syrup dumplings definitely qualify as fun!

When I was first told about maple syrup dumplings, I had the same reaction I imagine you’re having: “Wow- that has to be so sweet it will make my teeth ache!” But once I actually found a recipe and made it, I found out that it really isn’t as sickeningly sweet as it sounds. See, the sauce is made not only with maple syrup but water as well. So while it’s not something that you should eat all the time, it’s definitely worthy of an occasional spot on your breakfast table!

This dish is super easy to make and I would bet that all you’ll need to buy is the real maple syrup (unless you’re like me and try to keep it on hand). And you HAVE to use real maple syrup. If you can’t get any of the real stuff, make something else. If you try to use the fake maple syrup (the cheap “pancake syrup” you can buy in the plastic bottles in cute shapes) the dish will not turn out. The fake syrup doesn’t take well to cutting with water, at least flavor-wise. And it will be as sweet as you first thought when you heard the name of the dish. Just don’t try it; use the real deal!! Anyway, here’s what you need: 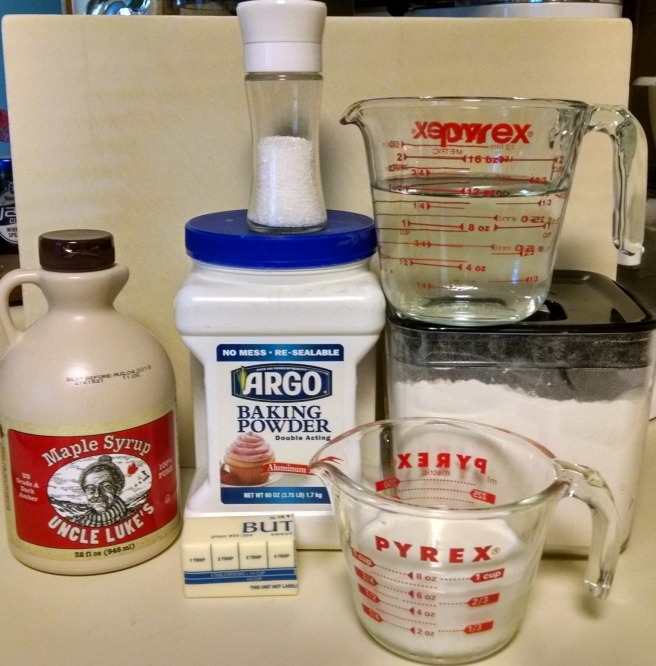 Once you get your dry ingredients mixed, you’re going to add the butter. The easiest way to do that is to use frozen butter and use a regular old box grater to grate it into the dry ingredients. Then all you have to do is stir and the butter will distribute, like so:

Set this aside for a minute and mix the maple syrup with the water in a large pan. If you don’t have a saucier like I do, use as big a sauce pan as you have or a soup pot. You could also use a very large skillet so long as you can cover it. One of key parts of this dish is having a tight fitting lid to make sure the dumplings cook through properly.

Look at that deep amber color! It’s a thing of beauty 🙂 Turn your burner to medium high and bring the sauce to a boil. Just before it gets to that point, go ahead and add the milk to the flour and butter mixture. You may have to work a bit at getting the dough formed, but it only takes a minute. You should end up with something that resembles biscuit dough…

By now your sauce should be boiling. Drop the dough by the spoonful into the sauce. I try to get dough balls that are about the size of a golf ball, maybe a tiny bit bigger. 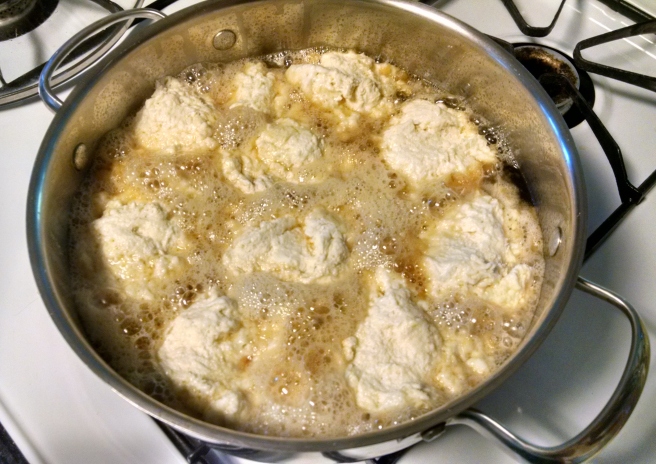 These will puff up quite a bit, don’t worry! Now put a tight fitting lid on your pan, lower the heat slightly to medium, and set a timer for 10 minutes (but don’t go far; you’ll need to keep an eye on things). You may notice…

That the sauce is bubbling up over the dumplings A LOT. That’s OK! It will do that for a little while. Eventually, though…

Things will calm down and the sauce won’t be bubbling as high. That’s when you need to back the heat down a little bit- but keep the pan at least at a fast simmer. When the 10 minutes are up take off the lid and check the dumplings.

See the dumpling in the lower part of the middle? I used a spoon to open it up a little and make sure it was cooked through. It should look like a biscuit inside with no raw dough. And the sauce… Oh, the sauce!

So thick and rich! The flour from the dumplings thickens the sauce into a velvety smooth taste of bliss! I usually give one and a half dumplings per serving with a good scoop of sauce over the top. It looks like a rather small serving, but a little goes a long way. If you want to add a little protein to this indulgent breakfast, bacon is a natural accompaniment. But I must say that as much as I love bacon, a mildly spicy breakfast sausage compliments the flavor of this dish perfectly. So go ahead; give yourself (and someone you love) a little treat for breakfast- you deserve it 🙂

*In a large pot or pan/skillet with high sides, combine the maple syrup and the water. Set the burner to medium high.

*In a small bowl, combine the flour, baking powder, and the salt. Add the grated butter and stir until the mixture resembles coarse crumbs.

*Add the milk to the flour & butter mixture and stir until the milk is worked through and there is no more flour in the bottom of the bowl. The dough will be fairly stiff.

*Once the syrup mixture is boiling gently add the dumpling dough by the spoonful, making the dumplings just slightly larger than a golf ball (or about the size of an egg).

*Once all of the dough has been used, cover the pan with a tight fitting lid, lower the heat to medium so that the syrup continues boiling gently, and set a timer for 10 minutes.

*Once 10 minutes have passed, take the lid off and check the dumplings. They should be firm and there shouldn’t be any sticky dough left in the center.

*Serve immediately, storing any leftovers in the fridge.